My twisted, crazy, and ridiculous journey to the Bolt


Someone made a request for me to give the details on how I ended up leasing 5 different vehicles since last December without taking a huge bath financially. Well, now is the time to tell that story!

A year ago, I owned only a 2012 Volt along with a leased 2013 C-Max Energi. I leased the C-Max for 2 years, and it was fine for what it was (mini CUV-ish car that could haul 5), but I found that the electric range was simply lacking. The fact that EV performance did not match its ICE performance was another downside. Plus it wasn’t exactly a looker, though exterior design is not that high on my priority list….just can’t be Prius or Leaf ugly. ;) Too many times I found myself babying the C-Max so that I didn’t burn any gas on my 17 mile commute…especially in the winter. That is simply no fun! I ended up deciding to just turn in the C-Max and walk away.

At that point in time, the Bolt was rumored to be going on sale in late 2016, so I started thinking to myself, “How can I bridge the ~1 year gap to the Bolt for the least amount of money possible?”

Around that time, I had read about a crazy cheap Cruze Limited lease deal that Volt owners could take advantage of due to a Volt owner-specific $2,500 rebate being offered by GM. There were reports of people leasing a 2016 Cruze Limited for $12/month after all incentives! I decided that I could suck up driving a Cruze until the Bolt landed.

After contacting some local dealers, I found one that was willing to lease a Cruze to me for 24 months for $0 down, $85/month (the higher payment is due to Maryland charging FULL sales tax on a lease, and not just the monthly payment like most other states. Screw you, MD!). I almost ended up walking out on the deal (supposedly they made a "math error"), but eventually signed it. Combined with the $300 in Visa e-gift cards the dealership tossed in PLUS the $700 Costco gift card for using the Costco Auto buying program, my final effective payment for the Cruze was $43/month! Tax alone should have been $54/month, so that tells you how ridiculous a deal it was.

So I had my cheap bridge to the Bolt parked in my driveway, so how did I end up leasing ANOTHER 4 cars, you ask?

Soon after I signed the Cruze lease deal, I heard about a fellow Volt owner that also got a dirt cheap Cruze lease that ended up selling the leased Cruze for $3,000 profit! What?! You can sell leased cars….and sell them for a profit?? No way, I thought. I got in touch with that person, and he said he used a new company (name rhymes with Creepy) that offered to buy his Cruze for $3,000 more than he owed on his Cruze (remaining lease payments + lease end buyout price combined). That person stated that if the car did not sell within 30 days of the Cruze being listed on the company's website, they would send a truck, cut him a check, buy his Cruze and haul it away! Which is what ended up happening.

After some careful research, I found the company was actually legit (the company has basically gone bankrupt now though...probably made too many money-loser deals like my Cruze!), so I had my Cruze appraised. They offered $3,700 more than I owed on the Cruze, so I said, “Hell yes, list it!” Obviously, no one bought the Cruze in the 30 days it was listed (the company that rhymes with Creepy offered me waaaaaay too much for my Cruze. You could have bought a new one for less than their asking price). They showed up with a truck, cut me a $3,700 check, and that was the end of my short-lived Cruze lease. I barely put 200 miles on it all said and told.

Of course, selling the Cruze would leave me with only 1 car, and I still needed 2, so what did I do? Lease another dirt cheap Cruze, of course! Cruze #2 wasn’t nearly as good a deal as Cruze #1 ($124/month, $0 down), but still dirt cheap for a $21k car. The $2,500 Volt owner incentive had expired, and there was also no $700 Costco card which explains the difference.
Around the time I leased Cruze #2, I found out that GM had slashed the price of a Spark EV lease to its lowest ever price point! Plus they were offering a free $500 Bosch L2 charging unit with a Spark EV purchase/lease. Sensing I could make a deal, I ended up leasing a 2016 Spark EV 2LT with fast charging for just $150 a month for 36 months. I was planning on flipping Cruze #2 for more “rhymes with Creepy” profit in order to get rid of that lease. However, that did not go according to plan.

I had “Rhymes with Creepy” list my car, but this time they did not give a 30 day purchase guarantee, and it turned out no one else was willing to pay the price they listed Cruze #2 for. Uhoh, now I was stuck with 3 cars in the driveway when I only needed 2. What’s a guy to do?! I contacted the dealer I leased the Spark EV from, and asked what they could give me for my Cruze. Turns out their offer would put me $1,600 in the hole. Not too good. I then asked about trading in the Cruze and leasing a 2017 Volt LT. It turns out in Maryland I can get a tax credit for a newly leased car equal to 6% of the value of the trade-in price of the Cruze, so after factoring in the sales tax credit, I would only be $800 in the hole. I would also qualify for a $2,300 MD EV tax rebate for leasing a Volt, so I ended up rolling that negative equity into a Volt lease, and even with the negative equity managed to lease the Volt for $261/month, $0 down. So the good news was the Cruze was gone and replaced with a 2017 Volt (yuuuuuge upgrade), and I was getting a $2,300 check in the mail from MD soon. The bad news? I still had 3 cars in the driveway!

The Spark EV had almost 2,000 miles on it by now, so I hatched this new plan of trying to trade it in for ANOTHER Spark EV, since that was the cheapest car I could lease. I would get ANOTHER $500 Bosch L2 unit in addition to any new deal. So I again asked the same dealer about swapping my Lime Green Spark EV for a Salsa Red one. He must have thought I was crazy, but helped me anyways since I was giving the guy a steady stream of purchases to pad his sales count. After again combining all the crazy incentives ($11,475 in all), I was able to trade in my green Spark EV for a red one for LESS than the original Spark EV’s payment (even with another $800 negative equity rolled in!). Spark EV lease #2 was actually $2/month cheaper than Spark EV #1. I had officially gone mad flipping cars!

So armed with a brand new Spark EV with just 17 miles on the clock (and a new $500 Bosch L2 EVSE), I ended up listing that Spark on EBay. I was hoping to break even on the transaction so that I could reduce my driveway to just 2 cars. I posted an EBay auction advertising my red Spark EV and L2 Bosch EVSE for $15,400, and a few hours before the auction expired, a person in Florida bid and won the auction! I ended up having to pay EBay a $125 auction fee. Since the buyout price of the Spark EV was $15,250, I had basically broken even on the sale of the Spark EV. Whew! The buyer arranged his own shipping, and a little while later Spark EV #2 was on its way to its new owner in Florida. I was back down to a 2012 Volt and 2017 Volt in the driveway.

So that brings me to today, where I am on the verge of having my Bolt EV delivered to me. But what about when the Bolt arrives, you ask?? I’ll once again have 3 cars in the driveway! No problem! I am in the process of finding a person in MD to take over my 2017 Volt lease, and it should be out of my hands by late January. Once my ’17 Volt is transferred, that should bring an end to the lease flipping chapter of my life. 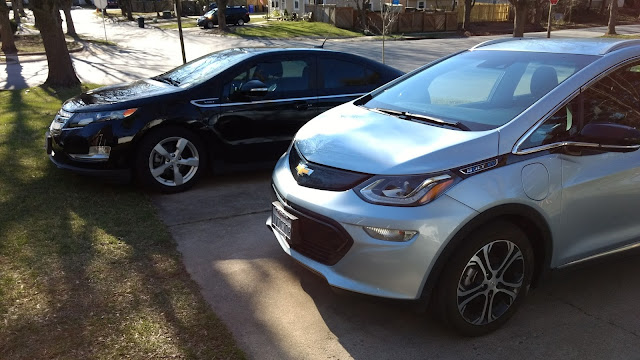 So, to recap my leases I’ve signed over the past 12 months:


So that is a recap of my crazy year of lease flipping summed up in a single blog post. :)